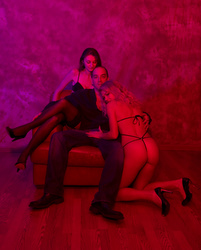 This is a good game to play when everyone's had a little booze in them. It just makes it a little funnier. You need two teams of 4 to 6 players. One team is made up of men and one of women. Items that you need are one pair of men's pyjamas (tops and bottoms), one sexy women's nightgown, one women's sexy underpants, two robes, two shower caps, two pairs of funny slippers, two paper bags. Each stag do team get a bag with clothes in it. The men's team gets the bag with the ladies nightgown and underpants, a robe, a shower cap and one pair of slippers in it. The women's team gets one bag with the men's pyjamas, one robe, one shower caps and pair of funny slippers in it.

Each stag party team gets in two groups about 40 feet across of each other so they can run a relay. Then to start the first player of each team takes the clothes out of the bag and puts then on over their clothes. After they have everything on they take the bag and run to their other group of team mates. Take the clothes off and put them in the bag. They then hand them off to the team mate in line and he does the same thing and so on until everyone on the team has done it. The first team to have all team players get dressed and run the relay and have the clothes back in the bag wins. Hope you like this stag weekends game, it's fun to watch the guys get dressed. When buying the clothes get x-large so everyone in stag nights can get them over their own clothes.