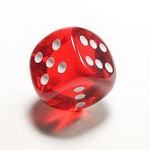 An easy drinking game once you all the players get the hang of the scoring and drinking penalties.

Step1. Ensure that you have at least 3 Dice-in case you lose one!

Step2. Make sure that the scoring system / rules are either written down or clearly understood by all the players.

Step3. Make sure everyone has at least one pint and a shot in front of them before starting.

Step4. Arrange all players in a circle: the game is best with 4 or more players otherwise it is a bit boring and gets messy early on!

The first player rolls both dice- depending on the total of the dice the penalties are listed below. Play proceeds in a clockwise direction.