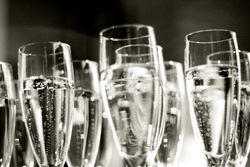 A nice, easy game. Divide into two groups, male and female. Have enough blindfolds for every team member. For example blindfold all the guys first, then have all women stand in front of them. The guys have to tell which woman is standing in front of them. But there is one rule, the woman cannot say anything. The guy has to tell which woman it is by feeling her body. You can add a rule, where the blindfolded person can't touch the face of the person in front of them, thus making it even harder to tell whom person is. When a guy guesses correctly he is then moved down to next woman and so on. There are a lot of adaptations to this game, so have fun!