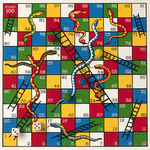 Step 1:  Go out and buy the board game- "Snakes and Ladders". Try Amazon

Step 2:  Bring your extra dice in case you lose one or more!

Step 3:  The rules are CHANGED for the shot drinking game as below: