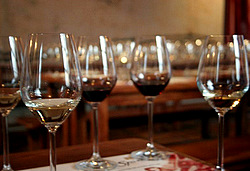 A good get-to-know-ya kind of game. Simple supply people and drinks. Low buzz factor. Not too bad of a game after everybody's had a few. Begin the game by saying "fuzzy duck" to the person to your left. That person then says "fuzzy duck" to the person on his/her left. This continues until someone decides to change the direction of play by saying "does he" (duzzy). "Does he" changes the direction and the phrase that is said. Not only does the direction change but the people must say "ducky fuzz." Now the game is going to the right with "ducky fuzz." The direction is then changed back by saying "duzzy." The words to say go back to "fuzzy duck." Any screw-ups ===> drink.

After awhile when the mistakes are more frequent, it turns into, "Does he F*ck?" or "F*ck he does." Variation the same player cannot say the same thing consequtively within the same round. ie if player 1 starts with "Fuzzy Duck," and play comes back around to him, he must say "Does He" before being able to say "Fuzzy Duck" again.