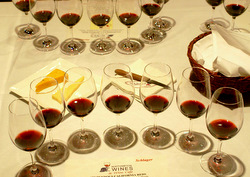 This is a British drinking game called fuzzy duck. It's a good word type game which becomes much harder when pissed. The rules are quite straightforward , the players sit round a table or in a circle on the floor. Each participant has a drink in front of them, we like to do this using small glasses each with a very strong shot in it. The play commences as follows one player is nominated to start. They either say "FUZZY DUCK" or "DUCKY FUZZ" the choice is theirs. If the first player said "FUZZY DUCK" then the player on their left can either say "FUZZY DUCK" or "DOES HE".

Two people can say "DOES HE" one after another, this has the effect that the play carries on in the same direction as before and with the same phrase. There are only two more rules, you cannot say the same phrase twice in one session. If you said "DUCKY FUZZ" last time and the order of play means that you should say "DUCKY FUZZ" again you must say "DOES HE" so reversing the direction of play and the phrase. If anyone makes any form of mistake in pronunciation or in the order of play,ie saying the same phrase twice, then a forfeit must be payed.

The game works best if you start a session slowly and gradually build up speed. A session lasts until someone makes a mistake. A small tip watch your pronunciation "DUCKY FUZZ" can quite easily become "Fb>b>K HE DOES" and "FUZZY DUCK" becomes "DOES HE Fb>b>K".